An act of kindness can completely change someone’s day, or sometimes even change their life. That’s what four young brothers did for an elderly woman in Texas back in June 2015. A woman by the name of Gerry Suttle was 75 years old when a warrant was issued for her arrest. Her crime: not mowing her lawn.

Suttle is from Riesel, Texas, an area that requires its homeowners to keep up with specific regimens and requirements when it comes to their lawn and lawn care. The grass on a lot across from Suttle’s home had grown to be higher than the allowed height, surpassing 18 inches and violating city code. Since Suttle owned the lot, it was her responsibility to keep up with the lawn care and make sure everything was up to standard.

She received a notice for this violation, but never responded to it. Afterward, a warrant was issued for her arrest. However, Suttle claimed she never received the notice, but it was too late; at least, that’s what she thought. A group of four young brothers decided to get together and help out the elderly woman by taking care of all the yard work she wasn’t able to do herself.

Suttle was completely shocked by their act of kindness and their sweet gesture. They had never even met each other before. It wasn’t long before other people in the neighborhood heard about what was happening and chipped in to help out, too. Read on to find out more about this heartwarming story. 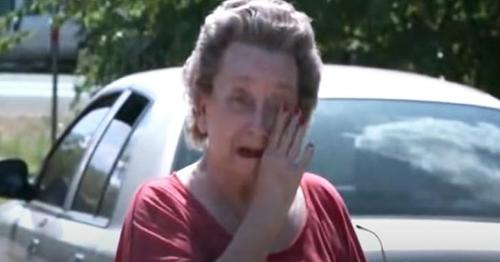 In June 2015, CBS reported that Suttle was issued a notice to appear in front of a judge because the grass on her lot was taller than 18 inches, violating city code. She failed to appear in court, resulting in a warrant for arrest being issued. However, the 75-year-old woman claimed she never received the notice.

The Reynolds brothers didn’t know Suttle personally, but heard about her predicament from a news report and wanted to help out by mowing her lawn. “We haven’t met her yet but she’s 75 years old and she needs some help mowing,” Blaine Reynolds said. “That’s the least we could do.”

According to World Around, other neighbors heard about Suttle’s situation and decided to help out, too, by mowing her lawn and trimming the weeds. The elderly woman was blown away by the kindness of her neighbors, especially the four young brothers she had never met before.

CBS reported that Suttle still needed to go to court just to sign documents indicating that she never received the original notice. However, she later received another notice ordering her to appear in court. “It is very heartbreaking to see that someone that I didn’t even know came out and spent two hours in the sun doing what we thought the city wanted done and then them turn around and say ‘no,’” Suttle said.

Fortunately, the Reynolds brothers offered to help again and again. “I’d do it for her a second time, or a third time,” Blaine Reynolds said. “Anything to keep that lady from having to go to court.”