There’s no question that weddings have gotten out of control in America. The over-the-top engagement and bachelorette parties, the lengthy registries packed with expensive gifts that you know the couple will never use, and then there are the wedding receptions themselves, which can set you back upwards of $50,000. It’s all insane!

Plus, before you even get into the wedding festivities, the groom has to pay some major bucks for the engagement ring — which he will definitely be silently (or in this case loudly) judged for if it’s small. Such is the predicament that one poor soul found himself in after he got a dose of some serious ring-shaming on Reddit this week.

The original Reddit post, which was shared on Monday, received a lot of opinions so far from people who couldn’t believe their eyes 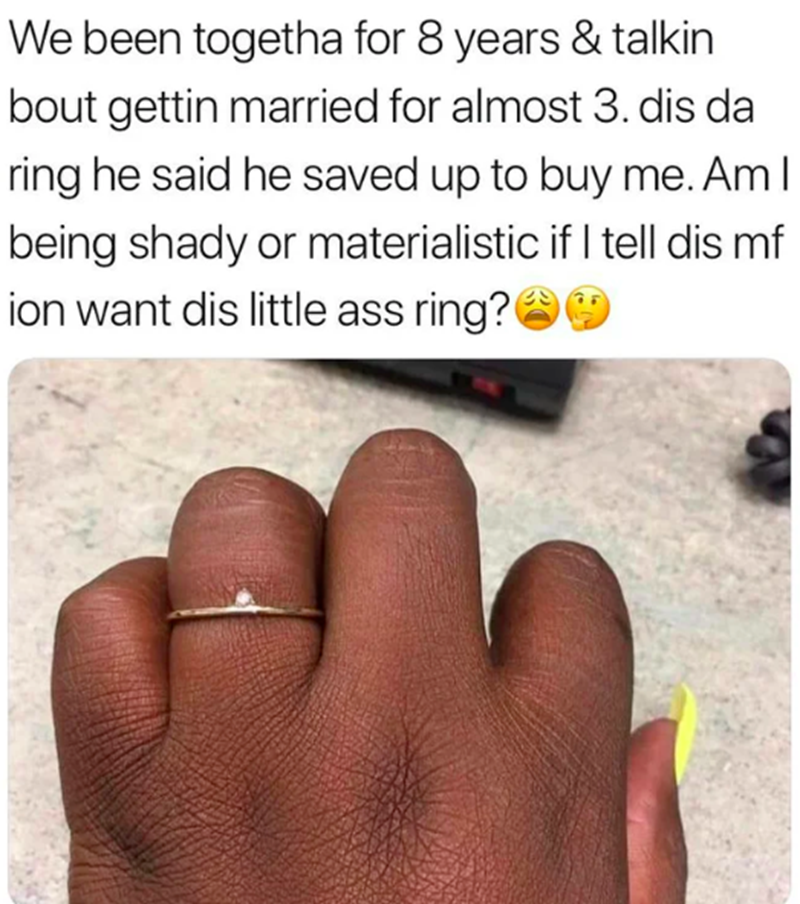 In it, the poster shares an image supposedly from a woman who recently got engaged after eight years with her partner. On her hand sits an alleged diamond engagement ring, accompanied by a simple gold band.

But you see, here’s the thing about this ring. The ring on this woman’s finger looks less like a rock and more like a pebble or a big piece of glitter. Or honestly, anything other than a real diamond engagement ring. Because, even to an untrained eye, this ring is small. And that’s exactly why the bride to be decided to take to social media.

“This is the ring he said he saved up to buy me,” the woman wrote. “Am I being shady or materialistic if I tell this mf ion want this little a– ring?”

Reddit’s verdict was pretty unanimous. The ring was pretty pitiful. Like, really pitiful. And mostly because they think it says a lot about her fiance’s judgment. 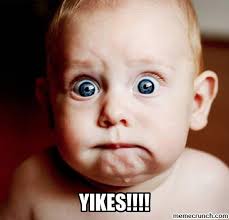 “I’m not materialistic when it comes to things like this but if my man proposed with THAT I would be full on insulted,” wrote one woman. “There are nicer, more substantial rings than that for $200. He went out of his way to find the cheapest possible option; which to me says that he’s probably like that in every aspect of the relationship and will probably be like that in every aspect of their marriage. You can count on it.”

Plenty of other folks took turns guessing at just how inexpensive the ring was too, and many believed that it could not be more than $200 to $300.

But being fair, $200 to $300 isn’t exactly a drop in the bucket for most folks. But for an engagement ring? One that a person’s presumably been saving up money for several years to buy? 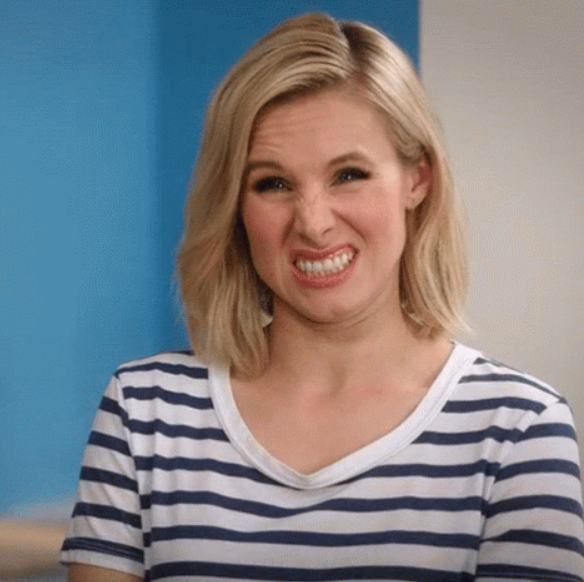 To many, the ring said more about her fiance’s saving skills.

“Not gonna lie,” wrote one person. “I’d be more concerned about his ‘saving up’ to buy something that little. Simply because it shows that a wedding is probably not in the budget.”

“I agree,” another person chimed in. “While I have no idea what this costs, it doesn’t look like a ring one would need to save up for. They have been talking about marriage for three years, but have they gone window shopping for engagement rings? Have they discussed style, size, and budget for the ring as well as a wedding?”

And plenty of Redditors felt that the woman should have “gently” let her man know that the ring wasn’t her style, asking to return it to the jeweler to choose one she likes. 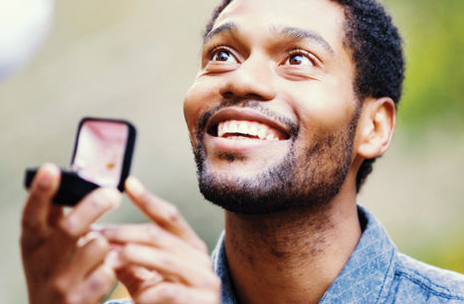 “This will hopefully lead to a budget discussion and set priorities,” one person explained.

“Exactly,” added another. “My husband has bought some jewelry for me that wasn’t my taste. I wanted to have an engagement ring I absolutely loved, so we picked it out together. We got engaged almost three years ago and I still stare at my ring every day because I absolutely adore it.”

“I used to think this was unromantic af, and then my then-bf made me do it and LET ME TELL YOU it’s amazing,” another woman said.

In fact, there was a lot of women who chimed in about their involvement in the ring-shopping process. They claimed that picking it out themselves — or at least steering their boyfriends in the right direction — ended up being the best move.

Even a few guys commented that they were very grateful for the help.

“I went so far as to make my then-gf pick out an engagement ring,” one man commented, “because I knew I wouldn’t get the one she wanted and I knew she’d be the one wearing it forever.”

Still, many felt warned that the engagement ring represented a harbinger of things to come… 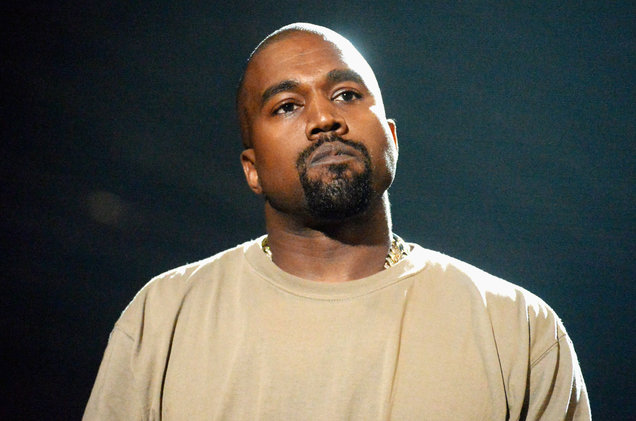 “Regardless of whether she likes the ring, if they’ve been talking about marriage for 3 years and this is what he was able to save for (possibly over the course of 3 years), unless her fiancé is living in poverty, it seems like this is a red flag regarding his ability to manage finances and save money, which is a major concern if you’re going to spend a lifetime with someone,” wrote one person.

At least a few folks came to the guy’s defense, well sort of…

“I kinda like her ring,” wrote one person. “It’s very modern and sleek looking. I’d wear that in a heartbeat.”

“It’s totally the kind of ring that I’d wear,” added another.

But perhaps one person said it best when they dropped this little truth bomb: “When the ring is the issue, the ring is not the issue.”

Now the thing is, this ring is tiny. But is this really a good reason to shame the person you supposedly love and want to spend the rest of your life with on the internet? And, of course, she could have always said no, right?

Tell us what you think in the comments section, and please be sure to share this story with your friends and family.