One little girl who has an awful past has been given a chance at a new life after the officer who showed up to a welfare check at her home decided to adopt her. In 2018, Lt. Brian Zach from Kingman, Arizona, arrived at the girl’s house for a welfare check after someone called in a disturbance. He found a toddler who had been abused and had sustained serious injuries.

That little girl was Kaila, and Zach said they connected right away. The officer stayed with Kaila for hours until the detectives showed up to take her to the hospital. They colored together and shared snacks during that time. Zach, who is a father of two, felt strongly that he and his wife Cierra could provide Kaila with a safe home even if just for a short while.

Zach said Kaila moved into their house with a bag of clothes that did not fit her, a sippy cup and nothing else. Weeks turned into months, and Kaila stayed with the Zach family. She attended preschool and began to know the Zachs as her parents. In summer 2020, when she was 4-years-old, Kaila was officially adopted by the family, and they could not have been happier to have her permanently in their lives.

Kaila’s new family sees her as a gift, and Zach says she is incredibly loving with a sense of humor. Criminal charges were filed against Kaila’s biological parents, and now that she has been adopted, she is no longer in danger of having to return to an abusive home. The Zach family hopes to foster more children in the future. Keep reading to learn more about Kaila and Officer Zach. 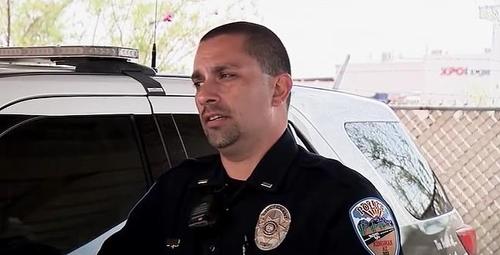 It took some time before the detectives arrived at the scene, so Zach kept Kaila company and consoled her. “We colored, we snacked … she held my hand and she was just this cute little thing,” Zach told Good Morning America. “Once detectives came, they picked her up and took her to the hospital.”

“My heart felt for this little girl … She had a very strong spirit about her,” Zach added in an interview with ABC 11 News.

After connecting with Kaila, Zach decided to foster her with his family until she found a more permanent home. They waited for her to be placed somewhere else, but she never did. Zach shared, “Within the second day she was calling my wife ‘mom’ or ‘mommy.’ I was ‘guy’ for a week or two and then when she started preschool she learned who dad was.”

Zach added, “We lived each week not knowing if she was going to go back to her biological parents, or how long we were going to keep her. Our goal was to love and care for this little girl for as long as it happened.”

“They said it would only be a couple weeks to a month until they could find a placement home for her,” Zach told ABC 11 News. “We played it week by week, month by month, court date by court date, not knowing how long we would really have.”

After 30 months together, the Zachs officially adopted Kaila.

Kaila is a special girl, and she seems quite happy now that she has found a safe and loving forever home. “She’s just so loving that God sent her to me for a reason, and I’m very thankful for it,”  Zach said.

Did this story touch your heart? Would you ever foster a child? Let us know what you think, and feel free to pass this along to your friends and family.